On Tuesday 30 March, AGBU Europe, in partnership with the Honorary Consulate of Armenia to Luxembourg, organized a webinar to present the book “Armenia, mon amour” in which ten non-Armenians from ten European countries tell their love for Armenia.

The presentation was an opportunity to highlight some of the compelling and surprising stories told in the book, published by Nineveh Press in December 2020, and hear from three of its contributors: professor Bernard Coulie from Belgium, scholar Svante Lundgren from Sweden and politician Frank Engel from Luxembourg.

Moderated by the Honorary Consul of Armenia to Luxembourg, Tatevik Manukyan, the webinar was also attended by the Ambassador of the Republic of Armenia to the Netherlands and to Luxembourg, Tigran Balayan, who expressed his support for the initiative of the book publication and his deep gratitude to the authors.

In her opening remarks, president of AGBU Europe, Nadia Gortzounian, sincerely thanked the contributors to the book, noting that “in a period of time when Armenians felt rather forgotten by the international community during the recent war in Artsakh, this expression of interest, love and support is particularly appreciated.”

In this book ten European friends of Armenia, among them professors and politicians, describe their love for this country. In moving and, at times, funny essays they depict dramatic events, lasting friendships, political struggles. We hear about lavash and brandy, genocide and revival, Yerevan and small God-forgotten villages in Hayastan and Artsakh.
The authors describe how their interest in Armenia started, how it has developed, and how it continues today. They write about the things in Armenia that touch and inspire them, and they recollect some of their most unforgettable encounters with Armenians.

The authors have different backgrounds and come from different countries in Europe. What they all have in common is a sincere interest in and deep love for the Armenian people. 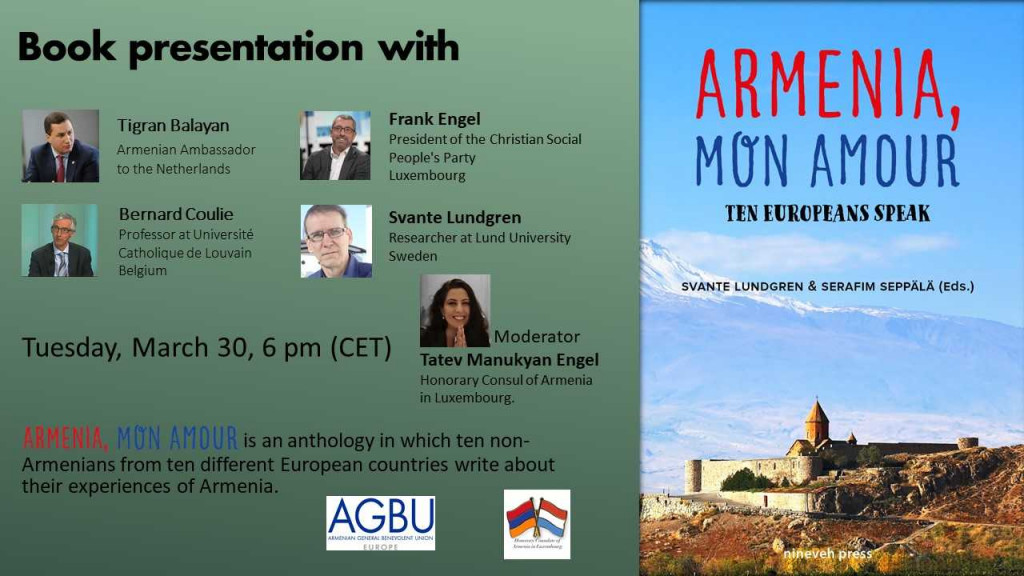